Kay and Richard are the brains behind Belle Media who publish the wonderful Tigeropolis books written by Richard himself. After printing the second Tigeropolis book, we thought it was time to find out some more about the inspiration behind the story and their journey to print …

What was the inspiration behind Belle Media?

Kay set up Belle Media in 2009 after working in a number of high profile roles in television – BBC, C4, C5 and Disney. I joined her later that same year. We work 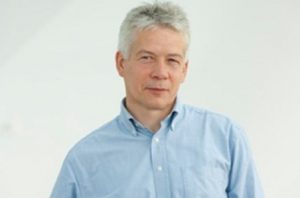 across a range of creative projects, including developing our own IP. Past projects include; a number of interlinked projects around the London 2012 Olympic Legacy, involvement in writing the technical sections of the England 2018 World Cup Bid and developing an interactive archive project in conjunction with the BBC, ITV and the National Library of Scotland.

Our first publishing venture was writing, producing and publishing what is very much a social history of Scotland’s Clyde Coast, from the late 50’s through to the Millennium, as told through the memoirs of one of the Clyde’s most famous captains, Robin Hutchison.

What was behind your decision to publish Tigeropolis?

We both have a long held interest in wildlife and conservation.

The Tigeropolis story developed out of an idea I had when I was travelling in India. I was part of a private sector team documenting the state of India’s tiger-related tourism sector. During the trip we visited a number of India’s tiger reserves and got a real peek ‘behind the scenes’. The trip took in some of the most famous tiger reserves, but also included visits to a couple of very isolated parks. Some of these parks never saw a single tourist.

The first time I saw a tiger it was amazing, such a powerful, majestic animal – a wonderful experience. I was also struck by how excited the humans were, and yet how totally, relaxed and in control the tiger seemed to be.  It got me thinking ‘what if the tigers really did run the whole show?’  …

How did you choose your title?

It just seemed the right title for a world we were creating with the books. A world where Bittu, Matti, Tala and Uncle Raj are in control. It also seemed a good idea to have a title that allowed us to develop the story in different ways, and in different formats. We are just about to launch an interactive Tigeropolis Game on Apple TV and iPad, and have produced a quarterly cartoon strip that we publish in conjunction with Hull City Official Supporters Club  – (Hull’s emblem is a tiger and the team strip is black and amber stripes).

I think the key difference is that, in writing for children, I’m able to be freer with my own imagination. I’m writing for older primary school children so, for that reason, I don’t really worry too much about issues like age-specific vocabulary. I tend to feel that the occasional challenging word, or concept, is something the reader can easily take in their stride, maybe even desirable. The illustrations also help.

Also, it’s probably fair to say that the story is not simply written for children.  It’s more a fun piece, one that should have wide, inter-generational, appeal. I think the books can be enjoyed by anyone willing to suspend disbelief, and engage with the world as a bunch of vegetarian tigers might, at least for just a while.

We’ve been really pleased how conservation experts have reacted to the book. They get it. One reviewer kindly said they would recommend Tigeropolis to children from 5 – 85.

How important are the illustrations to your book? 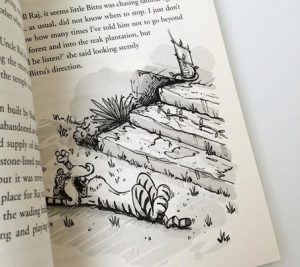 The illustrations are of fundamental importance to the text (but don’t tell Matt, or he’ll want equal billing!).

Right from the outset, we knew we needed to get an illustrator that shared our idea of the characters and the absurd situations. Looking back, we actually spent quite a bit of time trying to find the right illustrator, commissioning sample work from a short list, etc.  Matt has been brilliant, he caught the spirit of Bittu from the outset.

I’m conscious of where I think illustrations could really help the story as I write it, and indeed, in one or two places the jokes are purely visual, so I’ve actually sketched out (badly) how they should work during the writing. However, one thing I’ve learnt, through bitter experience, is that linking the story closely to the illustrations really complicates the book’s layout and design. Andrew, our Designer, has to spend quite a bit of effort in making it all work –  in fact, I’m amazed how well it all comes together in the end.

Why did you choose to go to print?

To us, it was always print first.

We come from a television and digital media background, but for Tigeropolis we always knew we wanted something tangible, something readers could hold in their hand, could flick through and just enjoy the illustrations, and something they could put up on their bookshelf. It’s fair to say, we probably never would have gone ahead with Tigeropolis had the only option been an ebook.

That said, we do have multiple formats: ebook, the audiobook and the interactive game – but we see them all as media that support the print book.

What was behind your decision to publish the audio book and how did you go about this?

Since we come from a digital media background, it was natural for us to look at other formats as well as print. The audiobook was Kay’s idea. She started her working life at Decca and then worked in radio, at one point she was a BBC World Service Music Producer. She organised it all.

We were clearly delighted when Richard E Grant agreed to come on-board. Richard was brought up in Swaziland and clearly has an affinity with wildlife.

It was all done in a day, using one of Soho’s top audio facilities. Our long term collaborator Ross, (of Spinning Finch), then helped in the final edit and with all the formatting issues for both downloadable versions and the physical CD.

As well as the audiobook and ebook, we are also working on an interactive video game for Apple TV and iPad and the cartoon strip for Hull City / Hull Tigers as previously mentioned.

Do you have any advice for other publishers and authors about interacting with schools and selling directly to schools/children?

Schools have lots of pressures on their time, so its important when approaching schools to make sure you clearly identify how you can help them. Our first 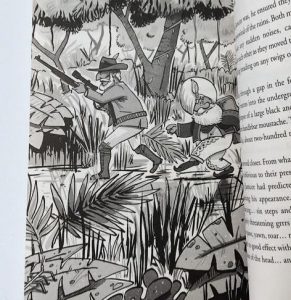 involvement was linked to World Book Day and we worked with the school’s specialist literacy teacher. She really liked the fact that Tigeropolis offered her a book that had the ability to engage almost the whole school. The older children debated the issues raised by the book, the younger ones were desperate to show off their ‘roaring’ skills. We were there for the day. We had to put in a good deal effort ahead of time to prepare and to ensure we had an interesting and entertaining presentation, but it was great to get involved, to see the children so enthused by the characters and the story … and we even sold a few books!

What do you do to market and publicise your book, and how do you split your time between marketing and writing?

In many respects writing is the easy bit. Promotion is a major activity in its own right – people need to devote time and resource to it. In our own case, we initially used our own contacts and resources, but we have recently brought in an experienced sales agent and a specialist PR. Even so it’s clear that, going forward, 30% -50% of our time over the next 18 months will be spent on marketing and PR as we, hopefully, build our brand and get people familiar with the world of Tigeropolis.

Kay and I enjoy getting involved in this aspect of the business – again it fits with our past experience, but we can also see that having someone else handle all the marketing and distribution are very good reasons why authors might still want to follow the traditional publisher route.

How did you find the Clays experience?

We have been very impressed with the service we have received from Clays – from our very first tentative enquiry, to our pressing the ‘big green Go’ button more recently on our second title with Clays (Tigeropolis : The Grand Opening), Rebecca and Georgina have been there to advise us and help us.

The quality is first class and they delivered exactly when the promised. We’ve dealt with a fair few printers in our time and I can honestly say they have been the best – they say something and it happens. Also, it’s not just about the paper quality and printing advice that have been first class – Rebecca and Georgina are well connected so if you need suggestions as to designers, illustrators and covers, they can help there too.

What is your top advice to new publishers?

I suppose it would be two things. Firstly, you are coming in to an industry that is very well established and, although there has been quite a lot of digital disruption in recent years, it’s still fair to say that people in the business really do know a great deal about the market; what readers want, and how things on the distribution side actually work – so it really is worth listening to people and asking for advice. We’ve always found people are keen to help. Secondly, it’s a great industry, with some great people, and getting into the business should certainly be fun for any newcomer … whether or not it’s profitable, well that’s up to you, and, of course, the readers. So I’d say to anyone thinking about starting out in the business, just go for it, but do take advice from the likes of Clays … oh, and of course, I’d wish them the best of luck.

What are your next steps? 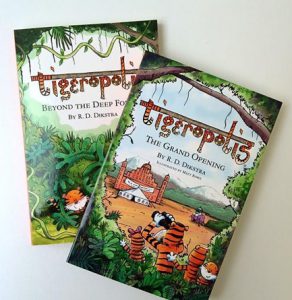 The second book in the Tigeropolis series – The Grand Opening is published in October. The third, Caught in the Trap, is due to go to the printers early next year.

The interactive game is out in the summer – the great thing about on-line, is how much feedback you can get on what’s working and what’s not. It means it can be upgraded and expanded as you go along.

One way or another the next 18 months are going to be quite busy.

The second in the Tigeropolis series : The Grand Opening, by R.D Dikstra is published by Belle Media on 12th Oct 2016.

Click here to find out more about Clays Indie Publishing. 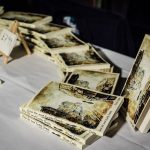 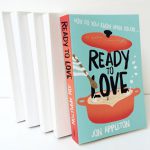 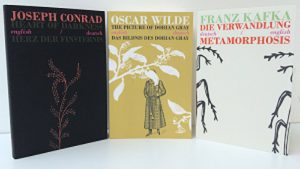 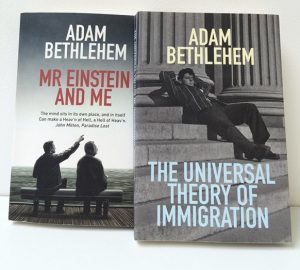