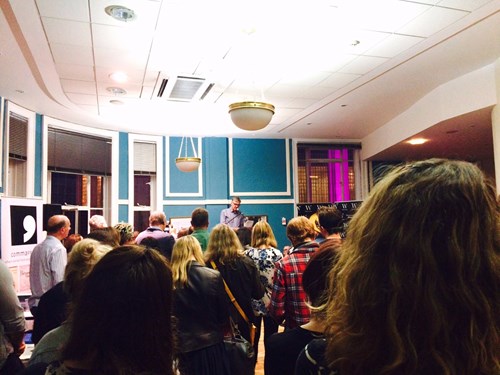 Last week, Clays Indie Publishing went up to Manchester to attend the Northern Fiction Alliance Roadshow event, kindly hosted by Waterstones Deansgate. For those who don’t know, the Northern Fiction Alliance is an exciting collective of independent small presses based around the north of England. Their aim is to position northern writing and publishing as a distinct product with global reach, generating international sales opportunities to publishers that wouldn’t necessarily have the chance to reach these markets.

Although it was the first such event the alliance had put on, it was sold out in advance, with everyone eager to see the best of northern fiction showcased in one place. In total there were eight publishers there, bringing with them a cross section of authors whose work they publish. Each publisher had the chance to introduce themselves and their press, and speak about the importance of publishing existing as a creative industry outside of the M25. An author from each press then read an excerpt from their work, demonstrating the talent on offer from these smaller publishing houses. Benjamin Myers took us into the murky world of a small northern town hit by a series of violent attacks in These Darkening Days, and Paul Hanley (former drummer of The Fall), critiqued the emphasis on London as a hub for 60s pop music in Leave the Capital.

It was great to see the diversity involved in northern publishing too. Although there was a strong sense of identity, and a particular Northern voice, the readings took us around the world: from digging up a body in a Caribbean crime novel (Jacob Ross’ The Bone Readers), to an existential reading of Sartre in France (Man Booker Shortlisted author, Graeme Macrae Burnet’s The Accident on the A35). The variety on offer demonstrated that Northern Publishing amounts to more than what many might immediately think of. Northern, and particularly working-class, life is an important subject in some of the work these presses publish, but it is by no means an obligatory topic, or one that pigeon-holes the alliance and its members. What the roadshow made clear, was that the NFA is both fiercely proud of its collective Northern identity, and is simultaneously outward looking and internationally savvy. With London office rents, house prices and accompanying salaries continuing to grow, don’t be surprised if more and more creative talent gravitates up North.

The NFA will be appearing with a stand of their own at Frankfurt this year, so please stop and say hello if you get the chance.